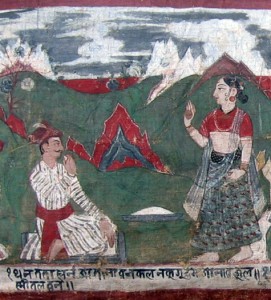 The legends overwhelming with supernatural events are quite enough to generate faith and devotion towards society, religion and the monastery as a whole. Late Thayapa, Moti Kaji Shakya, used to tell the legendary story of Keshchandra , Gurumapa, which  runs as follows –

During the time of Bhaskardeva, Keshchandra was living around the present Itumbahal. He was a prince, the youngest son of Bhaskardeva. He had a bad habit of gambling. He used to play pasa (a game of throwing twin dice like casino), and lost everything, became penniless, then he went to his sister, who was married to a rich gentleman and living at Bhagwanbahal, Thamel. His sister pleased to see him served him dinner in a golden dish. After dinner, he stole the golden dish from his sister’s house and went on to gamble, betting the golden dishes, he lost. The thirst of gambling seems to be never ending with Keshchandra. He again went to his sister’s house, begged innocence, and his sister out of compassion, served him again in a silver dishes. His passions for gambling make him steal that silver dish too, and tried his luck at gambling. The fate never seems to be in his favor, he lost again. He has no option but to visit his sister again, sister abused him about his habit of gambling, and complained about the lost dishes. This time she served him in a bronze dish, Keshchandra stole that bronze dish too and made bidding at gambling table, he lost, Keshchandra was highly depressed man. He had no where to go, absolutely nothing to do, nobody to help him, finally he decided to go to his sister’s house again, and asked for her help. His sister angrily reacted and abused him. This time his sister did not serve him in any dishes, but placed all the meals on floor; Keshchandra felt highly disgraced and dishonored by his sister. Disheartened Keshchandra did not eat that meal, but patiently collected that meal in a piece of cloth and went toward jungle. He went on and on! , until, he felt tired and take a rest under a shade of a tree. He had not eaten anything for days, feeling hungry he opened the food packed in a cloth. The food is already rotten, smelling. He thought about it spreading under warm ray’s sun, and takes a short nap. When he awoke, he found that the dried food is already being served by pigeons. Feeling hungry poor Keshchandra cried a lot, he had nothing to eat in the middle of the Jungle, he will die without any food, much worried he became unconscious, meanwhile, the pigeons who had eaten those foods felt sorry about plight of stranger, and out of compassion they thought about helping poor Keshchandra, by excreting gold. When Keshchandra gain consciousness, he saw that all the pigeon’s droppings turned into gold. He thanked god and pigeons for their benevolence and thought about constructing a monastery and never ever play gambling. He wished to dedicate his entire life in the name of god. The gold is so heavy that he cannot carry it alone. Meanwhile, a demon (?) Gurumapa came out of nowhere, in the middle of the Jungle, and threatened his life, poor Keshchandra fearlessly tried to negotiate with Gurumapa by calling him as his maternal uncle and a friend, a good friend, never kill a friend, Keshchandra was successful in persuading Gurumapa to carry sack full of gold upto Itumbahal and in exchange he vowed to serve him a good meal and accommodation and stay there as a honored guest as long as he wishes. With all this gold Keshchandra constructed Vihara and established the guthi tradition. The new Vihara is named as ‘Bhaskardeva Sanskarita Keshchandra krita Parawarta Mahavihara.’

While the life is running peacefully, the Gurumapa became a headache for the Keshchandra. Gurumapa -even though he was served fully satisfied he developed the habit of cannibalism. He stole small kids in the neighbourhood and eat them. The habit of Gurumapa to eat small kids alarmed Keshchandra and the neighbors. Gurumapa is so much feared that mother’s use to threaten their unrelenting, crying small kids, ‘do stop crying or else Gurumapa will take you away!’ The kids remain ‘pin drop’ silence with just the mentioning of the name of Gurumapa. As time passed Gurumapa became so much aggressive that even, a small only son of Keshchandra became victim of Gurumapa’s cannibalism. Then disheartened Keshchandra, decided to dump him in the open field of Tudikhel and serve a mun of rice and meat onece in a year, with this, brought a peace of mind in Itumbahal neighbourhood. The tradition of serving Gurumapa once in a year is still observed during the end of Holi festivals.

This legend tells us about how does the Itumbahal came into existence. Itumbahal is believed to be construct by Keshchandra, with all his gold brought into Vihara, with the help of Gurumapa. There is no written evidence like inscription, to commemorate the date of establishment.